If you’ve ever been to any part of the Southern USA, chances are you’ve eaten catfish. Plentiful, fairly easy to catch, and just plain tasty, these murky water dwellers are a favorite of fishing fanatics from all over the South. So how do you catch them? Catfishing tips abound, so let’s try to get through the muddy waters and see what actually works.

There’s a lot of options when it comes to technique and bait for catfish, but it’s really not that complex. Basically, if it lives near the bottom of whatever area you’re fishing, chances are catfish will eat it.

Worms and minnows are a favorite in many areas, as are stinkbaits. These fish are, after all, bottom feeders, and stinky bait is attractive bait for catfish.

Types of Catfish Species – If it’s muddy, they’re there

Catfish thrive in a variety of water systems. You can find them in shallow, warm ponds as well as cold, fast rivers. There are fresh water catfish and saltwater catfish.

In fact, there’s so many different species of catfish that there’s a catfish conference held every year.

Still, these fish can be broken into three main categories:

Blue catfish are the most plentiful and live in warm freshwater areas such as lakes and reservoirs. Channel catfish, are also plentiful and are a favorite of anglers as they are aggressive feeders and will hit almost anything that smells bad.

Fishing for Flathead Catfish is another story all together. Deep-water loving, elusive, and nocturnal, these elusive giants are prized among those who are searching for a real challenge.

Catfish are also an invasive species that are spreading throughout the USA and the world, both as freshwater invaders and salt water catfish. These giants can disrupt a river or lake system, and many anglers catch them to control their spread.

The Odd Catfish Out

The oddest of these is the Goonch catfish. This giant is native to India and Nepal that have been known to attack, kill, and eat humans. They were featured on the show “River Monsters,” due to their size.

Another man killer is the Lau-Lau of South America, common to the Amazon. This is the largest breed of catfish and has been measured at more than 440 pounds. Like the Giant Mekong catfish of Vietnam, it is a feisty fighter that will challenge any experienced angler.

If you want a true fight, however, go to the Amazon and tackle the Redtail (Pirarara) catfish. These are highly sought after and are considered to be the best fighting catfishes.

Other impressive, international, catfish include the Sharptooth of Africa, the Spotted Sorubim of Thailand, and the Wels of Finland and Sweden which is known to reach 600 pounds or more.

Best Bait For Catfish? Stink it up!

The world record catfish catch was made by a Taiwanese fisherman who landed a nine-foot-long, 646 pound monster using a net. Assuming you’re not fishing in Thailand, and also not using a net, perhaps we should look just a little smaller.

In the USA, the world record for a catfish was a 57-inch, 143 pound behemoth that was landed with a 30-pound test line – that’s right, 30-pound – in Virginia. Other large catfish weighing over 100 pounds have been caught all along the Mississippi river, even down into the Texas Panhandle.

What all those who are willing to disclose their secret have said, is that the bait they used moved and stank. As I wrote earlier, catfish use their feelers and sense of smell to hunt. So wiggling worms 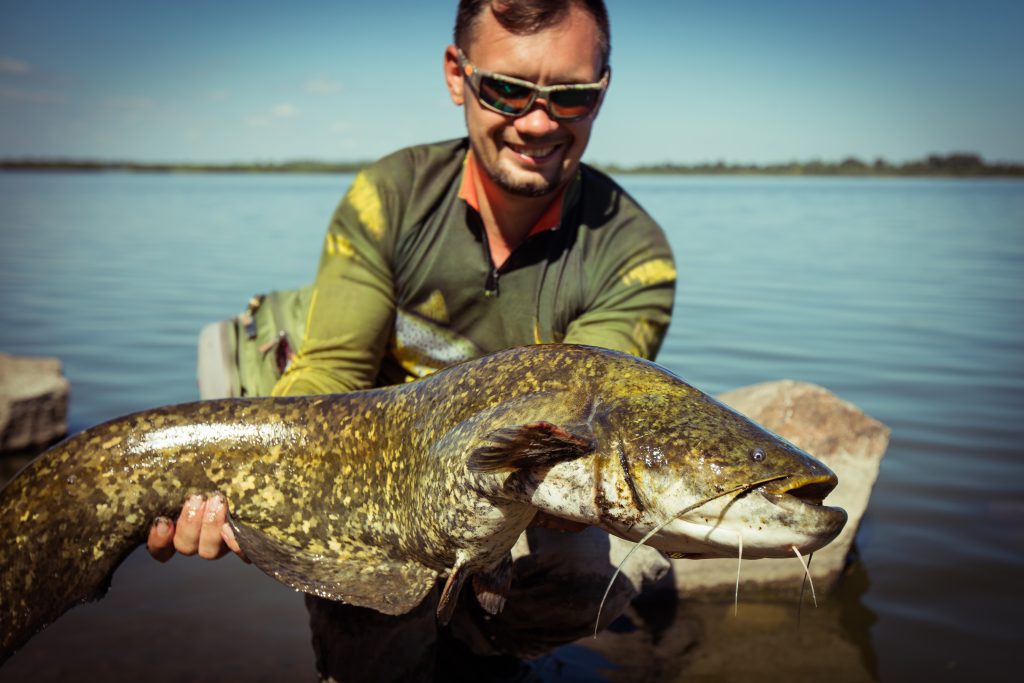 and stinking bait are sure to attract them.

Type of Bait to Use

Some common bait for catfish include live worms, chicken livers, crawfish, frogs, and minnows. When it comes to artificial bait, most successful anglers agree that catfish love the stink.

The best catfish lures are ones that not only imitate the fish’s natural prey, but carry a hefty aroma. There are scented lures specifically made for catfish that work great. In addition, there are lures with pockets for stinkbait built right in.

Catfish are naturally nocturnal, using the whiskers on their faces to feel along banks for food. Since they hunt mostly by feel and smell, you can find them in muddy rivers and along flats, bars, shorelines, and weedy areas.

If you are fishing for catfish during the day, look for them in muddy water areas like a tributary and its overflow. Again, think dark, which means deep structures like river bends or the base of drop-offs are great spots to find catfish.

Most catfishing techniques call for a bit of weight. This gives better casting distance and more accurate placement of your bait. Place a lead shot six-to-twelve inches above the hooks so the line will drop to the bottom but the bait will be accessible.

If there’s a current, cast alongside a snag and the bait will move slowly across the bottom and around the perimeter. This is also a good method for catfish in shallow flats and lakes.

While there are many catfishing tips abound, they all come down to the same few thoughts – keep your line to the bottom, let it drift, make it move and make it smell bad. It wouldn’t be a Rusty Angler article if we didn’t write about how to do it on the cheap.

Did you find that catfish pole you want but saw that a good composite rod is $500 or more? Ouch! That just won’t work here, especially when you can get that rod, and others like it, for a whole lot less with a good fishing giveaway.

I’m also a fan of fishing promotions, where a company like Shakespeare might be giving away a free Ugly Stick to the first few hundred visitors to their new website. The Rusty Angler is proud to announce our fishing giveaways. Just enter each day and share to win the best fishing equipment and you will be the envy of your friends!

Fishing sweepstakes are becoming more popular as well, as the internet hooks anglers into buying gear online. These sweepstakes allow marketers to target their rigs to the fishers who actually use them.

So win a little, buy a little, and get out there and get some cat. Happy fishing folks.